Becky Quick invited me on CNBC. I expected another CNBC spin-job and was not disappointed. Becky began with a half-truth about an Overstock accounting restatement, failing to mention that it was a restatement up (in other words, Overstock’s auditors had decided that Overstock had kept its books too conservatively – I am not sure if I have ever heard of such a “corporate restatement”).

Becky seemed put-off at my correction, then proceeded to bicker in an attempt to sound like a hard-headed journalist. Unfortunately, as you will see, in her eagerness she began tripping over her own statements, simultaneously accusing me of orchestrating a federal investigation and not knowing the first thing about it. Anticipating that something like this was going to happen, and having grown tired of going on CNBC and having them talk over me in order to prevent my actual claims from getting aired, I slipped into a Morchai Vanunu routine.

If you forgot who Mordechai Vanunu is, this is he (and yes, I had prepared the sign before showing up at the CNBC studio in San Francisco). 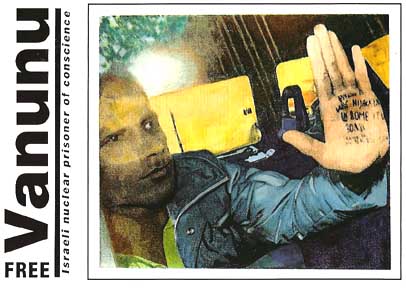 Herb Greenberg, The Worst Business Journalist in America, on the Conspiracy

SEC Chairman Christopher Cox appeared before a US Senate commitee to discuss the Bear Stearns implosion. Be sure…
byPatrick Byrne
2 comments

By December 2006, the cover-up of widespread stock manipulation by favored hedge funds with friends in the financial…
byPatrick Byrne
4 shares
4
0
0
0
0
0
0
0
22 comments

In early November, 2006 CNBC finally manages to air a simple, straightforward report on the issue that I…
byPatrick Byrne
No comments
Total
0
Share