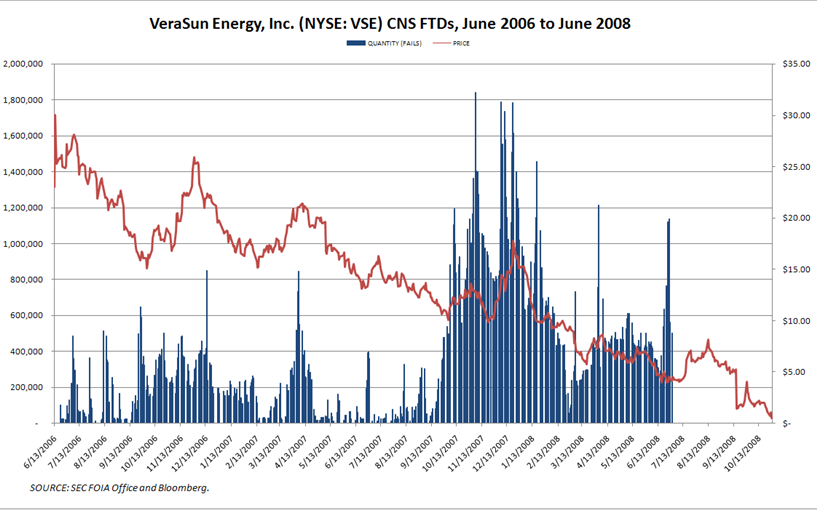 ===========================
I suppose I should write something brimming with wit and brio about the chart above, but since 500 people lost their jobs today as VeraSun declared bankrupcy, I think I’ll skip that and just state the point like the crescendo of a dry old economics class:

A price is a combination of of information about value and scarcity, and because some folks likely manipulated the scarcity in VeraSun, they likely manipulated the price. Thus VeraSun was likely deprived the ability to access the capital markets at the true market-clearing price for any securities offering for at least the last year, and maybe for longer. Say what some will about its business model, its adventures in corn futures, the virtues of corn-derived ethanol (not a big fan myself), etc., the point is that those capital allocation decisions are something the market should figure out, not “something the market should figure out but one side gets to sell and fail to deliver over and over and over.”

Interestingly, we don’t even know what happened with the fails during the third quarter because, as the SEC explains right now, tonight, on their website, in this choice little nugget:

“Currently, threshold lists include the name and ticker symbol of securities that meet the threshold level on a particular settlement date. Some investors have requested that the SROs provide more detailed information for each threshold security, including the total number of fails, the total short interest position, the name of the broker-dealer firm responsible for the fails, and the names of the customers of responsible brokers and dealers responsible for the short sales. The fails statistics of individual firms and customers is proprietary information and may reflect firms’ trading strategies. The release of this information could be used to engage in unlawful upward manipulation of the price of the securities in order to “squeeze” the firms improperly. “

The SEC Scandal You Don't Read About in the Papers

Bidz.com is an online auction company which went public in May of 2007. Take a look at the company’s…
byJudd Bagley
25 comments
Total
0
Share