On September 18, 2008, the SEC announced an emergency ban on short-selling. 797 tickers belonging to companies in the financial industry could not be shorted for the next three weeks. This was a drastic if temporary move, cutting off short activity cold-turkey to save the patient. Or, so it seemed at the time.

The rule went into effect the next day. Companies were added and dropped, exceptions were made — and then, exceptions to those exceptions — but the overall impression left with the investing public was one of a total ban, a wall of protection around the banned stocks.

SEC Chairman Cox commented recently that, “the actual effects of this temporary action will not be fully understood for many more months, if not years”. We here at Deep Capture just could not wait that long. So we looked at actual short sales effected on NYSE ARCA for the tickers in question, for the duration of the ban. The picture that emerged was less that of a total ban and more of a… well, let’s allow the numbers to speak for themselves.

We chose NYSE ARCA (Archipelago) for this experiment because it makes short sale data available. While it would be easy for all exchanges to release data on short sales, only two do so. This practice started as part of a pilot program to measure the effects of REG SHO and at one time, every exchange participated. By August 2007, the SEC had stopped requiring the release of short sale data because it was too burdensome for the exchanges. The two that went on publishing (Archipelago and Philadelphia), we might assume, forgot to turn off the database scripts that automatically generate these reports.

So what does the data say? To keep things simple at the outset, we only considered the original 797 tickers on the ban list. There were 940,000,000 shares worth of short sales executed on Archipelago for that subset of banned tickers. These 797 tickers were 80% of the 976 that eventually ended up on the list. Furthermore, only 705 (under 90%) had short trades executed on Archipelago. And for those tickers, Archipelago executed only 19% of the overall volume during the dates in question. Thus, to back into an estimate of the total shorting that took place in these tickers while there existed a ban against shorting them, one would calculate that 940,000,000 is 19% of 90% of 80% of all the shorting: this would imply that over 7 billion shares were shorted in these companies, while they enjoyed a ban against shorting their stock.

To be fair, a few tickers ended up being dropped from the list (and could be expected to exhibit regular shorting activity for part of the ban period). Excluding all trades in those tickers during the ban period (a generous assumption) would mean subtracting 1.4 million in volume. 938 million and change is the most conservative number that results from this calculation.

One question that naturally arises is this: what level of short sale activity should be considered normal on Archipelago? During the same period a year ago (a period that included the same number of trading days), these very same stocks racked up 332 million in total short volume on Archipelago. Granted, Sep/Oct 2008 was no ordinary time for market volume. Yet an almost threefold increase over the same period last year, coming at a time when there was ostensibly a total ban on shorting these stocks strains credulity. Below is a chart comparing the short sale volume for the same dates in 2007 and 2008: 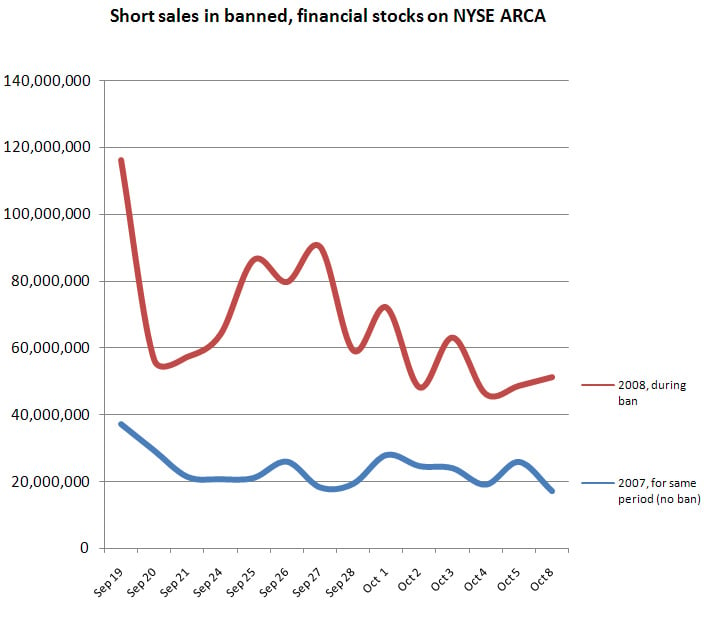 Coverage of the ban in financial media has been almost uniform in emphasizing the ineffectiveness of the ban. Jubin Zelveh titles his Portfolio.com blog entry on Dec. 19, “S.E.C. Short-Sale Ban: Pretty Much Useless” and quotes from a new academic paper in the pipeline showing a steep drop in the prices of banned NYSE-listed stocks. William Ackman of Pershing Capital (a person-of-interest here at Deep Capture), quoted in a Reuters piece on Oct. 6, proclaims, “Short sellers have been blamed for bringing down the market, but since the ban, the markets have been falling even further, which means ‘the longs’ are selling now.” Menachem Brenner and Marti G. Subrahmanyam, in their commentary on Forbes.com from October 1st titled, “End The Ban On Short-Selling” speculate that the ban on short sales, “may have already contributed to a further decline in prices”.

The take-away from the coverage is that there was ostensibly a total ban on short selling and prices declined anyway – suggesting that short sales were not to blame for falling prices, after all. A stretch, even if one concedes the underlying assumption but a somewhat plausible argument. What it fails to consider is how imperfect a ban this turned out to be.

And finally, Chairman Cox himself declared just the other day, “The costs appear to outweigh the benefits” — professing regret over the short-selling ban. What costs/benefits went into that analysis, we do not yet know. What we do know is that the ban on short selling was far from total in practice. A barrier marked with 940 million holes is, in fact, a sieve… and any analysis that laments its meager virtues should recognize that fact.

This series will analyze the many ways in which the short-sale ban has indeed been a sieve.

We are expected to believe the following set of facts regarding the recent gubernatorial race in AZ: So…
byPatrick Byrne
7 shares
7
0
0
0
0
0
0
0
20 comments