Rocker Partners and Bethany McLean: the smarmiest guys in the room

the evidence shows that Rocker Partners hedge fund first approached Bethany McLean about Fairfax on December 7, 2006. Bethany then met with Rocker Partners employee (and former SEC attorney) Richard Sauer 11 days later, and presumably began work on what would become her March 6, 2007 article The inside story of a Wall Street battle royal shortly thereafter.

In a recent item, I concluded — based on my analysis of an email exchange between former Fortune reporter Bethany McLean and Copper River Partners (formerly known as Rocker Partners) — that McLean wrote a highly critical article about Fairfax Financial Holdings (NYSE:FFH) with the expectation that her work would cause FFH stock to drop precipitously in value.

By way of review, the evidence shows that a manager of Rocker Partners hedge fund first approached Bethany McLean about Fairfax on December 7, 2006. Bethany then met with Rocker Partners employee (and former SEC attorney) Richard Sauer 11 days later, and presumably began work on what would become her March 6, 2007 article The inside story of a Wall Street battle royal shortly thereafter.

The evidence further demonstrates that when, by March 21, 2007, FFH stock price had gone up 45 points instead of down as expected, McLean was unhappy.

Why would this be?

Anybody familiar with the ongoing conversation held on this blog knows the answer, but not wanting to take for granted that all readers here are either sufficiently seasoned or in agreement, I offer the following, which was, like the above-referenced email exchange, gleaned from the many documents gained through discovery in the Fairfax Financial vs. SAC Capital, et al, lawsuit; specifically, from records of Rocker’s evolving short position in Fairfax stock during the months before and after the publication of McLean’s article.

In February, Rocker added just over $100,000 to their Fairfax short.

Then, on March 1, 2007, three trading days before McLean’s article, Rocker added another $1.5-million to their position.

All told, Rocker was betting at least $4-million that the price of Fairfax stock would drop.

But unfortunately for Rocker, that’s not what happened.

Indeed, Fairfax stock rose a healthy 20% between March 6th and 22nd, when Rocker’s partner emailed McLean, wondering why Fairfax wasn’t dropping as a result of her story, as expected.

Apparently satisfied that circumstances were unlikely to improve, that very day Rocker began covering its short position…97,000 shares worth, to be exact. By the end of May, Rocker’s entire Fairfax short position was closed out, at a substantial loss.

Of course that’s all interesting, but as always, there’s more.

An analysis of the failed trades in Fairfax stock recorded and disclosed by the SEC for that period proves instructive.

Most notable is the sharp decline in FFH failures to deliver observed at the end of May, 2007. In fact, with the exception of a transient spike on June 8, fails are essentially reduced to zero at precisely the same time Rocker Partners closes out its FFH short position. 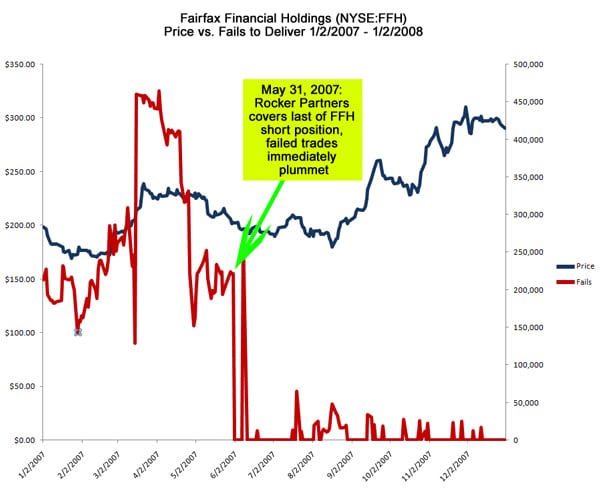 Given such a deep commitment to cheating, I find it surprising Rocker Partners never managed to be a more successful hedge fund.

The word on TheStreet.com

Spyro Contogouris and the gentle art of hedge fund persuasion

For the good stuff regarding my meeting with Trump, start reading around Page 135. It will become clear…
byPatrick Byrne
5 comments

What’s wrong with woke is what is wrong with Marxism more generally. As Thomas Sowell wrote, when discussing…
byPatrick Byrne
10 comments
Total
0
Share