Why Are Fortune Magazine and the New York Financial Media Suddenly Pimping Sam Antar the Crook?

1. In the 1980’s a New York electronics retailer named Eddie Antar, running a chain of discount electronics stores called, “Crazy Eddie,” perpetrated an enormous swindle. As a recent Fortune Magazine article put it, “The debacle cost investors roughly $145 million and involved just about every kind of accounting fraud then known to man, including receipt skimming, money laundering, and the counting of bogus inventory.” A key player in the swindle was the company’s CFO (and Eddie Antar’s cousin) Sam E. Antar.

2. When Sam was busted, he ratted out his two cousins, who each served several years in prison on the strength of Sam’s testimony (I guess Eddie was Crazy after all, to trust Cousin Sam). Sam Antar ratted out family members in return for a reduced sentence of six months’ house arrest and 1,200 hours community service.

3. Barry Minkow is a convicted stock cheat who, at the ripe age of 23, was sentenced to 25 years for his various stock fraud schemes (no small feat). He was released after 6 years. Recently he became entangled in a new stock manipulation case. Three months ago Minkow was subpoenaed and deposed, and in that deposition (pages 8-10), disclosed that Sam Antar the Crook had paid Minkow $250,000 (in two payments, one of $100,000 and one for $150,000) to turn his skills against a public company that he, Sam Antar the Crook, was shorting.

4. Within months of Sam Antar the Crook paying Minkow $250,000, the State of New York issued a $471 tax warrant against Sam Antar the Crook (it turns out that Sam has quite a history of these, so it cannot be put down to forgetting to put a stamp on an envelope). Is the fact that a fellow could not pay a $471 tax lien, but could wire a quarter-million dollars to an ex-con stock cheat, odd?

5. At the request of Sam Antar the Crook, Utah Attorney General Mark Shurtleff met with Sam on the condition that Sam not attempt to spin it as an endorsement of Sam’s views. Sam had his meeting then immediately welched on that promise. The Attorney General wrote a letter describing this chain of events, along with a disclaimer against believing Sam, that he twice attempted to post on Sam’s blog. Sam refused to let the Attorney General post it. At that point, Attorney General Shurtleff made public this letter scolding Sam for welching, and discouraging the public from listening to Sam about pretty much anything (“In light of Mr. Antar’s background as a convicted white collar criminal, we believe that the public should carefully scrutinize and objectively examine any public statements Mr. Antar makes.”)

6. Sam and Sam-cronies (Gary Weiss and Howard Sirota) regularly accuse those who disagree with them, or try to expose their shenanigans, as anti-Semites. Ed Manfredonia, one of the many whom they have repeatedly accused of anti-Semitism, asked the Anti-Defamation League to get involved. Displaying great class, the ADL got involved, and wrote this letter utterly rejecting those allegations. Notwithstanding the ADL’s statement, Sam continues to make endless allegations of anti-Semitism towards those who cross him.

7. These days Sam spends much time posting dozens of deposition-style posts directed at me and my colleagues, over-and-over, dozens if not hundreds per week (what an odd “hobby” for Sam to have). Generally they are inconsequential half-truths, quarter truths, or flat non sequiturs. Even people who formally tolerated him have begun pointing out his lunacy to him.

8. Sam attempted to intimidate one of my colleagues by posting on a public message board the names and address of my colleague’s wife and two little girls, ages 6 and 9: 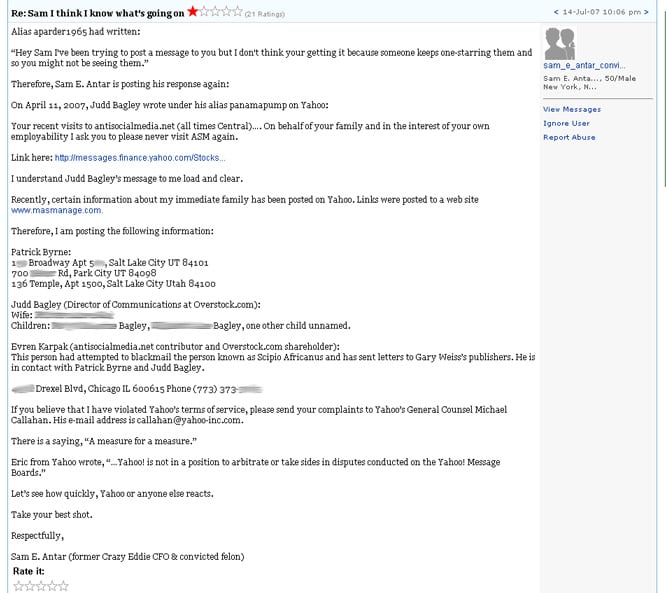 How would reputable journalists treat Sam? They would not touch him with a ten-foot pole. Which would explain why several figures within the New York financial media are anxiously and suddenly promoting him.

That’s right: though Sam is a swindler who ratted out his own family, a $500 tax cheat capable of paying a convicted stock swindler $250,000, and a message board basher who threatens 6 and 9 year old girls, Sam Antar the Crook has recently received heavy, positive promotion from the New York financial media.

For example, Sam Antar has recently appeared on CNBC, Herb Greenberg has salivated over him at lunch, and Forbes columnist Gary Weiss cannot stop fondling Sam in print (more on them anon).

Most significantly, Fortune Magazine recently published a 2,738 word profile of Sam Antar (“Takes One to Know One”) in the style known among journalists as, “a lotion job.” What was most remarkable about Fortune’s profile of the reformed Sam was that, as Fortune mentioned 4/5 of the way through:

“As a would-be fraudbuster, Sam E. has yet to notch his first kill. (Although in fairness he doesn’t hold himself out to be a full-time 10-Q detective. ‘I don’t have 40 people working for me like the SEC,’ he says.) He hasn’t brought any companies down or caused any regulators to open any investigations.”

That is, Fortune wrote a lotion-job profile of an ex-con swindler whose discernible contributions to humanity consist of nothing noteworthy beyond taking part in an infamous and massive scheme of fraud and embezzlement then saving his own skin by ratting out two family members in return for a reduced sentence, and whose recent “reform” has amounted to being a paymaster to another ex-con stock manipulator and threatening two little girls, but nothing beyond this that Fortune can name.

Does that seem odd of Fortune? Because it seems a little odd to me.

Is the sudden, major promotion that Sam Antar the Crook is receiving from the New York financial media due to some inexplicable lapse in their research or understanding, or is there a motive behind it? If there is a motive, whose motive is it? What interests are being served?

Which question brings us one step closer to the heart of the problem: Gary Weiss, The New York Post, Herb Greenberg & CNBC, and Fortune Magazine. 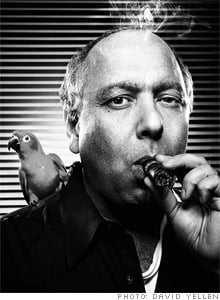 "On any other day, that might look strange.” – Nicholas Cage, Con Air

Truman Show Moments and Doublethink on the Road to Deep Capture

You may remember Peter Weir’s 1998 film, The Truman Show, in which the protagonist (Jim Carrey) is enjoying…
byPatrick Byrne
31 comments

I did not really have a burning desire to join SABEW. To steal a page from Groucho Marx, I wouldn't want to join any club that would have SABEW members as members.
byPatrick Byrne
23 comments

Summary – For over 10 years Gary Weiss (once a reporter with BusinessWeek, and recently, a columnist with…
byPatrick Byrne
53 comments
Total
3
Share