Oh, so…. You’re Saying We Were Right?

Just a day or two after I threw in the towel on Arizona Attorney General Mark Brnovich, he surprises me. General Brnovich has issued to Senate President Karen a 6 month “interim report” on his investigations Fann is the woman who had the fortitude to stand up and drive the Maricopa Audi to completion. Six months after she turned her investigation over to the Attorney General, he has now confirmed in an official letter that the Maricopa Audit led him to investigate and catalogue in his letter a shocking amount and kind of systemic vulnerabilities (precisely as CyberNinjas reported), punctuated by the news of criminal fraud for which he has been and is prosecuting people.

Attorney General Brnovich put his money shot in the opening:

You might also read the gracious reply of Arizona Senate President Karen Fann:

For all those who have kept the faith (and especially those who donated to the Maricopa Audit), thank you. I hope your faith feels rewarded at last.

Upon Review, I am raising PBS Grade to a Solid B

Upon Review, I am raising PBS Grade to a Solid B

If you are following along from home, you know that some months ago PBS and Doug Bock Clark…
byPatrick Byrne
14 comments

I remember a few things about the strip of road, the hotel, the strip mall, and the…
byPatrick Byrne
12 comments 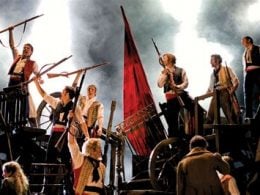 Begging a Question Until It Bleeds: On “The Plot to Overturn the Election” (PBS, B-Grade)

One must give credit where credit is due, and the PBS team behind this week’s documentary, “The Plot…
byPatrick Byrne
31 comments
Total
7
Share