Paragon of Integrity Whitney Tilson Gets Laryngitis, Too

In the summer of 2006  Whitney Tilson took me to lunch, and invited me to speak at his then-upcoming 2nd Annual Value Investing Congress on November 9 – 10, 2006. Here is Whitney’s original announcement:

The 2nd Annual New York Value Investing Congress will feature a compelling speaking program of value investors who have proven over time that their methods and strategies succeed. Some of today’s most prominent value investors will detail the thinking behind their investing methodology, discuss recent successes and offer their latest stock recommendations.

Speakers at the 2nd Annual New York Value Investing Congress will include:

Some weeks before the conference, Whitney contacted me to let me know that Jim Chanos and David Einhorn were insisting to him that I not be allowed to appear. Naturally, Whitney caved to Chanos and Einhorn, and disinvited me.

There were no hard feelings, on my part, anyway. No blood, no foul. Simply by way of comparison, however, I will tell a related story. In 2007  Brett Goetschius contacted me with an invitation to speak at his upcoming PIPEs conference. I told him of what had happened with Whitney Tilson. Brett said, “Don’t worry, in the last year the hedge fund community has changed their attitude. At least 50-60% of them now understand you are right. Especially the small and mid-sized ones. In any case, I’m extending this invitation, and I won’t back out.” Brett proved true to his word, and I presented to about 800 hedge fund managers a presentation I called, “DeepCapture“, to a warm reception. I launched this site a week or so later.

Given this history, however, about which some men might have felt shame, it was odd to see Whitney Tilson slag me  in a column he wrote in 2008 (as you will see below).

By 2009 Deep Capture was tracking and writing about the activities of Sam Antar and Barry Minkow.  Both were hard-core convicted felons. At the age of 23, Barry had been sentenced to 25 years in prison, and served seven.  Yet we became aware that Barry Minkow was actually working for Whitney Tilson. I was more than a little surprised to see that, as there are normally sharper difference between the riffraff and the simply spineless. While Barry claimed to be doing “research” for Whitney, but we knew that Barry did not actually do anything resembling what a legitimate hedge fund would consider research. As Florida State Judge Gill Freeman later wrote:

“Fact No. 29: Minkow withheld documents he perceived to be harmful to his case. Among other things, the concealed documents demonstrate:

• that Minkow’s investigators questioned the accuracy of statements of fact he included in his report on Lennar;

• the perfunctory nature of Minkow research and investigation before he accused Lennar and its executives of operating like a ponzi scheme, giving its COO a disguised kickback, being a financial crime in progress, and other statements;”

Deep Capture had learned that Whitney Tilson had paid Barry Minkow $40,000 to do something. But if Barry did not do research, what was Whitney paying him to do?

In March, 2011 Barry Minkow was arrested, and last week plea bargained his way down to another five years of jailhouse stew.

So I thought that was a good time to ask Whitney a few questions.

I hope this finds you well. It has been too long since our lunch together.

This weekend I have finalized a nice little piece on Barry Minkow, with whom it appears you are acquainted. You may note that you are invited to respond, and may wish to take advantage of this invitation, before I give this wide distribution.

Barry Minkow spent last week in plea negotiations regarding a federal indictment on which he is hoping to receive only 5 years, says his lawyer. (LA Weekly: Barry Minkow to plead guilty to insider trading).  In December, 2010, a Florida judge threw her proverbial book at Barry Minkow, and it glanced off Sam Antar, who had been paid Barry’s paymaster to the tune of $250,000, Barry had testified. In addition, the judge found as a matter of fact that Sam Antar destroyed documents necessary for her trial. Minkow also gave sown testimony that well-known New York hedge fund manager Whitney Tilson paid him $40,000: more on this below.

Barry Minkow and Sam Antar are two of the most remarkable swindlers in recent American history, each guilty of frauds measured in the hundreds of millions of dollars. Two decades ago their names gave off the same foul stench that Bernie Madoff’s does today.

Whitney Tilson is invited to explain to DeepCapture’s audience why he would join legendarily convicted financial criminal Sam Antar in making payments to also-legendarily convicted financial criminal  Barry Minkow, who now is pleading guilty to his 58th financial felony. (You know how to reach me, Whitney. DeepCapture will give you 250 words, with no editing. But we may provide commentary.   )

While I am at it, I have two other questions:

L) All this is a bit unsatisfying for those who would want to regulate short sellers. But unfortunately, bad news is part of any financial system.

Davidoff is becoming more and more incoherent as he tries to wrap up this hatchet job of a post. He appears to be saying that because the market sometimes (he asserts) is a sucker for media hype (by, I assume, market manipulating short sellers?), there are people who want to regulate short sellers and prevent them from ever saying anything negative about any company. Other than Patrick Byrne, who are these people?

When you wrote this, did you really believe that I “want to regulate short sellers and prevent them from ever saying anything negative about any company.”

2.       Do you consider Barry Minkow’s plea bargaining to a 5 federal-year prison term (per his lawyer: see Minkow in Plea Talks With U.S. Prosecutors Over Fraud Case, Lawyer Says) an  inappropriate attempt by the federal government to “regulate short sellers and prevent them from ever saying anything negative about a company”?

I look forward to the courtesy of your response. I trust 72 hours will be sufficient.

If you choose to respond on your own blog, I predict you will be so unconfident of your response that you will find a circumlocution to avoid mention of “DeepCapture” (just wanted to get that on the record now).

Oddly, Whitney, once so voluble on these matters, has been incapable of response. Given the integrity and moral fiber he demonstrated in withdrawing his speaking invitation at the insistence of Jim Chanos and David Einhorn, I cannot say I’m shocked that Whitney Tilson would lazily ascribed to me a claim such as that quoted above, then refuse to defend it, and also refuse to clarify his involvement with the two-time criminal Barry Minkow.

Dr. Alex Halderman is a Professor of Computer Science and Engineering and Director of the Center for Computer…
byPatrick Byrne
31 shares
31
0
0
0
0
0
0
0 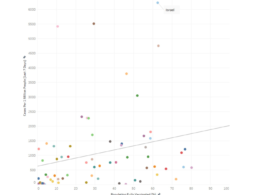 “Increases in COVID‑19 are unrelated to levels of vaccination across 68 countries and 2,947 counties in the United States”

“FindingsAt the country-level, there appears to be no discernable relationship between percentage of population fully vaccinated and new…
byPatrick Byrne
Total
0
Share