In late 2005, I spent over four hours interviewing Overstock.com CEO Patrick Byrne as part of a podcast series on entrepreneurship I created.

After I published the audio of the interview, somebody posted a link to it on the Yahoo Finance message board dedicated to Overstock.com.

Seeking the origin of the resulting surge in downloads led to my first stock message board visit.

It was really strange.

What first struck me was the flurry of responses to the original posts in which users with foul mouths and bad attitudes warned that the linked mp3s contained computer viruses.

Of course, no mp3 has ever carried a virus, as I’m fairly certain the posters knew.

These were followed up by all manner of lies meant to discourage others from listening to any of the three Byrne interviews I would eventually publish.

Worse, they posted all manner of lies about Patrick Byrne personally – something I was in a unique position to recognize having just interviewed him at length.

Intrigued, I started examining the posting histories of the most prolific sources of this disinformation, trying to identify patterns that might in turn reveal their underlying motives and, often enough, their real identities.

Well over two years later, I remain engaged in the same pursuit. And, to be frank, I suspect that by now, I understand it better than anybody else, largely because of a few methods I’ve developed and the great amounts of information I’ve received from others.

What follows is a little bit about what I’ve learned.

In the case of the latter, they are either paid outright as contract “stock researchers”, or paid in put options (which increase in value as a company’s stock drops in value).

Third: in some cases, it’s actually the managers of these short-biased hedge funds doing the bashing.

Before getting to the rest of the story, here’s some background.

SFBC got hit from all sides, and its share price withered.

In particular, there was a deluge of libelous (though tame compared to others I’ve seen) posts to Yahoo’s SBFC message board. Most notable were the attacks leveled against then-SFBC Chairwoman and President Lisa Krinsky.

Krinsky responded by filing a lawsuit against ten anonymous posters: Does 1 through 10.

In order to discover the identities of the ten Does, Yahoo was served with a subpoena.

In accordance with policy, Yahoo alerted the posters, giving them two weeks in which to contest the subpoena – an expensive proposition few bashers have the financial ability to pursue.

And indeed, none of the ten Does opted to put up a fight.

With one exception: Doe number 6, known on Yahoo Finance as Senor_Pinche_Wey (which is a slang Spanish term that is as obscene as you can imagine).

Doe-6 fought the subpoena, was rejected, and appealed to California’s Sixth Appellate court.

Clearly, Doe-6 had some resources backing him up…to say nothing of a deep motivation not to be exposed.

And, fortunately for Doe-6, his appeal was successful and the subpoena was quashed.

This decision – handed down in February of this year – essentially affirms the First Amendment rights of message board bashers to say whatever they want about the officers of public companies. (An excellent analysis of the decision can be viewed here.)

In their decision, the Court noted:

We likewise conclude that the language of Doe 6’s posts, together with the surrounding circumstances — including the recent public attention to SFBC’s practices and the entire “SFCC” message-board discussion over a two-month period — compels the conclusion that the statements of which plaintiff complains are not actionable. Rather, they fall into the category of crude, satirical hyperbole which, while reflecting the immaturity of the speaker, constitute protected opinion under the First Amendment. 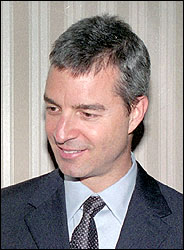 Ready for the other shoe to drop?

I’ve learned, through multiple sources, that the immature speaker in this case, Doe-6 (aka Senor_Pinche_Wey) was none other than Daniel Loeb himself.

As a matter of fact, Senor_Pinche_Wey is one of many abusive message board identities used by Loeb to harass officers of companies Third Point was shorting, often illegally.

On August 12, 2005, Patrick Byrne first publicly accused several hedge funds of working in coordination to illegally manipulate the share price of Overstock.com and many other small, public companies. Within 48 hours, armies of bashers arrived for the first time on the Overstock.com stock message boards across the web, all working off of a the same obvious set of talking points. Among the points these bashers took the greatest care to make, time and again: that Byrne was crazy for thinking that any two hedge funds would ever work together when shorting.

What makes it so interesting is that at least 72% of the participants are hedge fund managers shorting the company they’re smearing.

Polytechnic_Trader and jidoo may or may not belong to Loeb or Chapman…I don’t know either way.

I do know that Chapman also posts under the aliases tautologicaltrader, ghaulty_lodgick, notably_absent, and herniatedgorilla – all of which can be seen, time after time, posting things I’m quite certain Chapman would not dare say in person.

Do hedge funds coordinate their attacks?

And as you’ll read in a soon-to-be-published-post, message board bashing is only the beginning.

The ties that bind Sam Antar and Barry Minkow

Barry Minkow’s sudden return from ex-felon to current-felon has come as a surprise to some, but not to the Deep Capture team; for we have, over nearly four years, sought to raise awareness of Minkow’s place in a much broader, criminal stock manipulation ecosystem.
byJudd Bagley
36 comments

A moment of déjà vu