Pardon the sound quality in the early part. I was verklempt. I was trying to tell them a…
byPatrick Byrne
6 comments

Say what you will about business, the fact remains that in government, one can make wormy twisty Philadelphia-lawyer…
byPatrick Byrne
9 comments 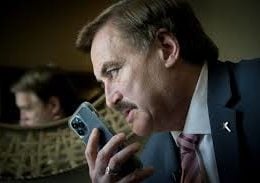 Mike Lindell & I Had a Chat

You folks have a nice treat coming for you this week. \
byPatrick Byrne
6 comments
Total
0
Share