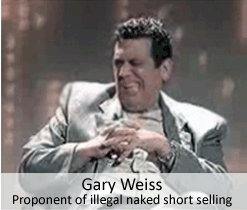 Over on Reddit, everything old is new again. A whole new generation of investors, mad about settlement failures…
byPatrick Byrne
5 comments